Photography is a big part of In the Wild VBS. It’s not just about snapping the perfect picture of an animal in the wild, but it’s zooming in on 5 key “snapshots” of Jesus in Scripture that help us to see the big picture of who He is, why He came, and why that matters to you and me! So why not create an oversized Polaroid® frame that families, friends, and even classes can use to capture snapshots of their memories from VBS? It’s a super fun (and definitely on theme) photo op to use before, during, AND after VBS! The frame can be cut out of standard white poster board, or out of something more durable such as foam core, project board, or cardboard. (NOTE: Dimensions will vary based on the original size of the material used. Draw out everything lightly with a pencil first. Step back and make sure you are happy with the look before cutting. Make adjustments as needed.)

Handheld Frame Made Out of Poster Board (22-by-28-inches) This and other great ideas can be found in the Decorating Made Easy book. How will you use this photo frame in your VBS?

With the changing of technology comes a significant change in our VBS 2019 curriculum. In the past, every Bible study leader pack included a CD-ROM with a few of the VBS songs and printable teaching helps. But with more and more computers now being manufactured without disc readers, it has become difficult for many people to easily access the files on a CD-ROM. So beginning this year with In the Wild, CD-ROMs will no longer be included in leader packs. Instead you will now find a Music for Babies CD in the Babies–2s Leader Pack, Music for Preschoolers CD in the 3s–Pre-K Leader Pack and Kindergarten Leader Pack, and Music for Kids CDs in the Grades 1–2, Grades 3–4, and VBX leader packs. That means that for the first time Bible study teachers will have ALL of the music for their age group at their disposal!

But what about the printable helps that were on the CD-ROM? Don’t worry! We’ve not taken anything away … we’ve just made it easier for you! Instead of having to download the files from the CD-ROM, we’ve gone ahead and printed all of the reproducible items for you and dropped them into your leader pack. All you have to do is make copies!

It is our sincere hope that these changes make the tasks of preparation and teaching easier for you! 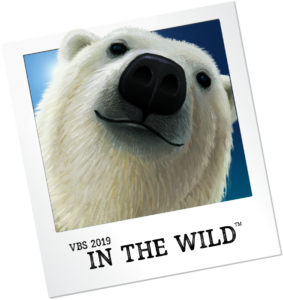 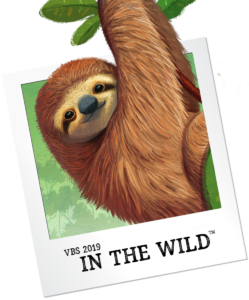 This summer, LifeWay’s VBS will let you get up close and personal with elephants and egrets, polar bears and penguins, cockatoos and crocodiles, and so much more! That’s right, VBS is going In the Wild! Grab your favorite camera and buckle your seatbelt for a wild ride into seven animal-covered settings:

As you experience each natural habitat, you may catch a glimpse of the tip of a tail or a flash of color racing through the terrain. There’s nothing quite as thrilling as encountering an animal up close. But what we really hope is that kids will have an even greater thrill when they encounter Jesus in Scripture!
During VBS, kids will focus on some amazing, real-life encounters with Jesus. Each encounter is like a snapshot—it’s a specific moment in time captured on the pages of Scripture. And when put together, these isolated encounters reveal the most amazing truth of all—Jesus Christ is the Messiah, the Son of God, and by believing we can have life in His name.
Let’s take a look at the snapshots of Jesus we’ll zoom in on during VBS!

Day 1: Encounter at the Temple

In this encounter, Jesus is a child not much older than the ones we’ll teach in VBS. This is the story of 12-year-old Jesus staying behind at the temple after his family had left to return home. His parents found Him three days later sitting with the teachers and asking such insightful questions that it amazed these teachers who had been studying the Scriptures all of their lives. Jesus asked His mother, “Why were you looking for me? Didn’t you know I would be in my Father’s house?” Even at this young age, Jesus knew He was God’s Son.

Day 2: Encounter at the River

In this snapshot, Jesus is a grown man and ready to launch His earthly ministry. Jesus went down to the river to be baptized by John the Baptist. When John saw Jesus coming, he announced to the people, “This is the One I told you about! Jesus is the One who takes away the sin of the world!”
As Jesus came up out of the water after being baptized, the heavens opened up and the Holy Spirit came down from heaven like a dove. God’s voice said, “This is My Son whom I love Him, and I am very pleased with Him.” What an amazing thing to hear God’s own voice declaring that Jesus is His Son!

Day 3: Encounter on the Water

This is the story of Jesus walking on top of the water toward the disciples’ boat. As soon as He climbed inside, the wind stopped and the waves were calm. The disciples witnessed that not only could Jesus walk on water, but He also could control the wind and the waves. They immediately fell to their knees and worshiped Jesus and said, “Truly, You are the Son of God!” Now that’s an incredible encounter!

Day 4: Encounter at the Tomb

One of the most radical encounters in history took place at Jesus’ tomb. Three days after Jesus been crucified and buried, Mary Magdalene came to the tomb and found the stone rolled away. She ran to find Peter and John, who examined the tomb and found it empty. As Mary stood alone crying, someone called her name. It was Jesus! Now this was the ultimate amazing encounter! Mary ran back to tell the disciples, “I have seen Jesus! He is alive!”

Day 5: Encounter on the Road

Two men were walking along the road to Emmaus when Jesus joined them, but they didn’t know it was Jesus. As they walked, they told Him about the things that had happened in Jerusalem over the past few days. And then Jesus began to explain to them that everything that had happened was exactly what the prophets had said would happen to the Messiah. Jesus went all the way back to the writings of Moses and began to explain how the Scriptures prove that Jesus is who He said He is.
Once the men finally realized that it was Jesus who had walked with them and been their dinner guest, they ran back to Jerusalem to find the other disciples and to tell them that they had seen Jesus alive with their own eyes.
—–
Each of these is an incredible, life-changing encounter with Jesus. Every snapshot of Jesus’ life provides us with an opportunity to respond to the gospel. At In the Wild VBS, kids will have the opportunity to experience an up-close and personal encounter of their own with Jesus. And that, of course, begins the adventure of a lifetime!