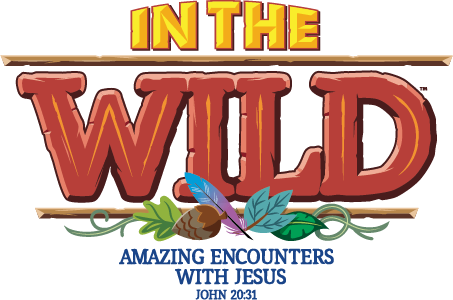 Here’s a closer look at the Bible stories that will be taught during Lifeway’s VBS 2019: In the Wild. Each true story recounts a real life encounter with Jesus. These “snap shots” of Jesus reveal His identity to us and help us to discover that Jesus is who He says He is—the Messiah, the Son of God, and that by believing we might have life in His name.

When Jesus was twelve years old, He traveled with His family to Jerusalem for the Passover Festival. After the celebration Mary and Joseph headed back to Nazareth. After traveling a full day they realized Jesus was not with them. They hurried back to Jerusalem and finally, on the third day, Mary and Joseph found Jesus in the temple. Jesus was listening to the teachers and asking questions. Everyone was amazed at how much Jesus understood at such a young age.

John helped people get ready for Jesus, God’s promised Messiah. John told people to repent of their sins and be baptized. One day Jesus came to the river and John told the people Jesus was the One he had been speaking about. Jesus asked John to baptize Him to follow God’s plan. After Jesus was baptized, an amazing thing happened. The Holy Spirit appeared to Jesus in the form of a dove and God declared that Jesus is indeed His Son!

After a long day teaching near the Sea of Galilee, Jesus sent the disciples ahead of Him in a boat. Late at night there was a storm and the waves beat against the boat. The disciples saw Jesus walking to them on top of the water, and they were frightened. After Jesus identified Himself, Peter asked to come to Him on the water. Jesus said, “Come.” As Peter walked to Jesus, he became afraid and began to sink. Peter called out for Jesus to save him. Jesus reached out, caught hold of Peter, and got back in the boat with him. The wind immediately stopped, and the disciples proclaimed that Jesus really is the Son of God!

On the third day after Jesus had died on a cross and been buried, Mary Magdalene went to the tomb. As she approached the tomb, she saw that the stone had been rolled away. Mary went and told Peter and John who came to see for themselves. After Peter and John left, Mary looked into the tomb. She saw two angels. They asked why she was crying. A man standing nearby asked who she was looking for. Mary thought the man was the gardener, but when He said her name she recognized His voice. It was Jesus! He sent Mary to share the amazing news with His disciples. Jesus is alive!

Two men were walking toward the village of Emmaus talking about everything that had happened during the last week. Jesus joined them, but they did not recognize Him. The men began explaining everything that had happened to Jesus and that He was a great Prophet. Jesus began telling them about Himself using Scripture to explain why all the things had happened. When they arrived in Emmaus, Jesus stayed and ate with them. As Jesus tore the bread and gave pieces to the men, they recognized Him. Jesus immediately disappeared from their sight. The men returned to Jerusalem and told the disciples about their amazing encounter with the risen Jesus.
Save
Save